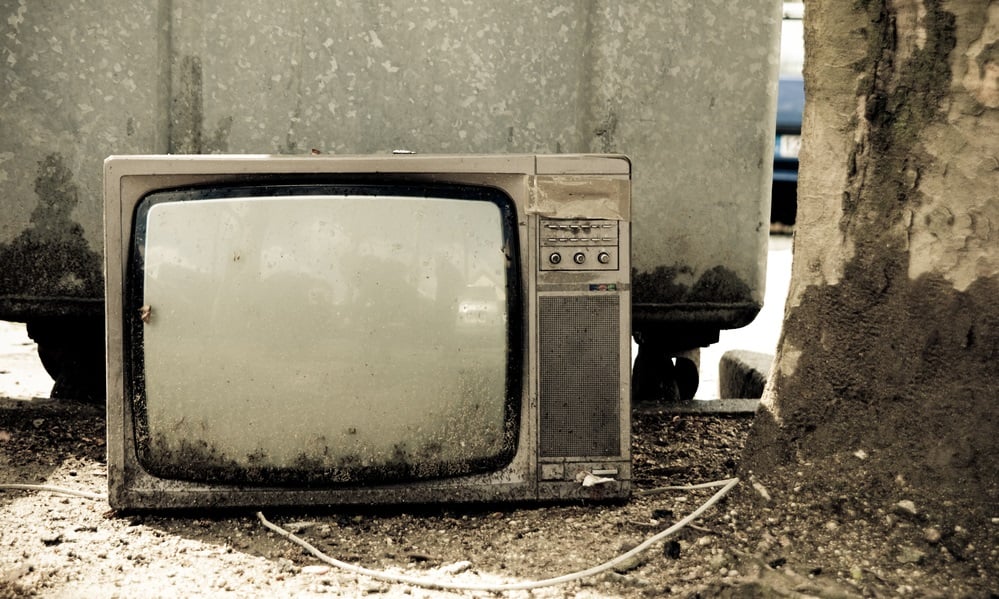 We're in a time when just about everything we want to get rid of can be recycled. Not only the cans, paper, plastic and glass from our homes, but TV recycle is possible, too.

The United States has a vast number of televisions, many of them old. In fact, according to Nielsen’s National Television Household Universe Estimates, there were 118.4 million TV homes in the U.S. during the 2016-17 TV season. In addition, there were believed to be an average of 2.3 TVs in an American home in 2017.

Essentially, that means in just the United States alone there are probably over 270 million televisions of all types. And this doesn't include businesses, schools, government offices and more. Probably one TV set for every one of almost 328 million people living in the U.S. today.

When TV Recycle Efforts Are Needed

Like any other electronic device, televisions break down, stop working or at least become out-of-date and unwanted. In addition, Americans are particularly fond of upgrading their devices, TVs included. There are always those who want a bigger, better and newer television. And this means the old ones have to go somewhere.

Sometimes an old TV simply gets put into another room and gets used on occasion, like when relatives come to stay for a few days. Other times that old television set gets sold or given away to friends, family or neighbors.

Selling it can be a great way of getting rid of old TVs. This can be done in a yard sale, online with sites like Craigslist or eBay, or even to a local second-hand store or thrift store. However, it's not too likely that the seller is going to make much money on an old TV.

Another option, donating, can be a great way to benefit others in need or an organization that helps those in need. And, if the value is great enough, these donations can be used towards tax deductions with proper receipts provided. Although not an obvious venue for donations, a local school, youth center, homeless shelter and other similar organizations can often benefit from having another working TV for their facility.

But what about that old TV that doesn't work anymore? Good question, and this is where TV recycle becomes a great option.

Most older TVs before 1980 or so were built with fragile and heavy cathode ray tubes (CRTs) and these devices created a challenge for either disposal or recycling. Typically, when the prices of metals are high enough, businesses recycling old TVs could profitably dismantle them in order to recover their components recovered. In addition to benefiting from the relatively high prices of metals, the glass tubes containing toxic lead could be melted down to make new CRTs.

Now that new technology has replaced old CRTs with LCD and plasma screens, there isn't much demand for the materials in the old lead-filled glass CRTs. And any recycling and recovery efforts are often tied to the current market value of the recovered materials.

As recently as 2011, when gold prices reached record levels, the recycling and recovery industry was happy to buy old TVs. In fact, many municipalities invested in recovery programs to collect old TV sets from residents because the recovered materials more than paid for the costs of the programs.

What about those old flat screen TVs?

After a brief downturn the metals market began to see increases in the prices of gold, silver and copper beginning in 2017. But newer televisions are no longer composed of leaded glass! And the supply of those old CRT sets, while still around, is diminishing.

Recycling old flat-screen televisions has different challenges. The older models were mostly built with LCD lights in the screens. These huge screens can contain up to 20 mercury-filled tubes.  The problem is that mercury is a toxic metal. Recycling efforts must be careful not to break the tubes since poisoning of humans can occur from inhalation, ingestion, or skin contact. And the screens are difficult to dismantle so workers have to be especially careful to avoid rupturing the tubes.

However, despite the difficulties and limited amount of actual recoverable materials, recycling and recovery disposal is still the best option for getting rid of your old flat-screen TV.

Getting Rid of Your Old TV

At the end of the day, the TV recycle option is always the best for old units that no longer work. And the most efficient and far more convenient approach for taking care of your old TV recycling needs - whether we're talking about old computer monitors, old CRT televisions, or large flat screen units - is to call a reputable junk hauling firm.

Junk King provides an efficient, safe and eco-friendly TV disposal service to make the whole process easy for you. Our experienced television removal team will have the manpower to haul off that old TV set without damaging any part of your home on the way out. We’ll do all the heavy lifting - no need to carry items out to the curb.

Finally, we’ll make sure that the TV is disposed of at a proper recycling facility so that it doesn’t do any harm to our ecosystem.

If fact we remove almost all types of e-waste, including:

Our professional and insured TV disposal team will show up at your home or office; we call 15 minutes before we arrive on site and we’ll give you a free estimate based on how much room your items take up in our truck. You point and we haul your old TV set into our junk removal trucks, with no hidden fees.